Person behaves as a SON in house, at the same time that person behaves like an EMPLOYEE in the office.
With polymorphism, the same method or property can perform different actions depending on the run-time type of the instance that invokes it.

There are two types of polymorphism: 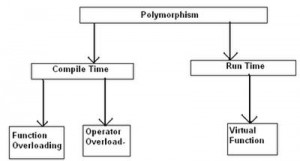 When a virtual method is called on a reference, the actual type of the object to which the reference refers is used to determine which method implementation should be used. When a method of a base class is overridden in a derived class (subclass), the version defined in the derived class is used. This is so even should the calling application be unaware that the object is an instance of the derived class